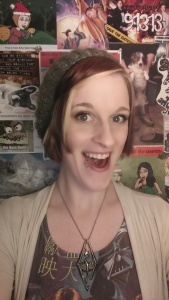 Just who are these people that are lending their voices to audio drama? We think these actors are too good to hide, so we’ll be sharing them with you one at a time (don’t want to overload you too fast, darlings).

Amy Pirkl will play Sif, the Norse goddess of fertility. Sif is associated with summertime and abundance; as Thor’s wife, she provides his thunderous aspect with a fruitful outlet. The Poetic Edda is full of salacious rumors about Sif and her feelings about Loki, but she claims to be above reproach:

you should admit, that of the children of the Aesir,

that I alone am blameless.

She’s such a sweetheart. It’s really a shame that she stole Jarnsaxa’s man.

Amy Pirkl is a Company Member of Theatre Pro Rata. She is a freelance props designer, and has worked at the Guthrie, Park Square, Theatre in the Round, Nimbus, Yellow Tree, and a butt ton of others. Amy also is a member of Brain Punch Games, and a puzzle constructor/operator at Trapped Puzzle Rooms. She loves cats more than is reasonable, and her dog Badger is the best thing to ever happen on this planet. When Amy grows up, she wants to be a firefighter or Godzilla.

Amy is partly excited to be involved in this project because she wants her husband to think she’s a cool kid. He is a sound guy and a Norse Mythology buff.

Amy’s favorite character from Norse Mythology is Ratatoskr because she likes squirrels.

Amy is currently reading A Clash of Kings by George R. R. Martin. Other books on her nightstand include: Hitchhiker’s Guide to the Galaxy, the Tao Te Ching, the Tarot Bible, and Dr. Seuss’s Sleep Book.

Amy’s favorite pre-performance ritual is drinking a goblet of mead, then smashing it so no other mortal can drink from it again.

At this very moment there is a kitten named Gir lurking under Amy’s bed, waiting for her chance to attack the other cat, Kittenvader Zim.

Want to know how you can be part of this project? You can help all of our artists and make our podcast available for free to everyone by contributing to our Indiegogo campaign.  Join us!

This site uses Akismet to reduce spam. Learn how your comment data is processed.